A History of Wapack Ski Areas

Before examining the history of skiing on the Wapack Trail, it is important to the story to note the many popular and historic ski areas that were developed along the mountains of the Wapack Range. The earliest was the Temple Mountain Ski Forest, established in 1935 by Bill Glazier. It was located on the east side of what is now the Temple Mountain State Reservation in Peterborough. It featured a network of ski touring trails and several rustic cabins heated with wood, advertised as providing “low cost winter weekends.” Though ski touring continued, this was the time when downhill skiing was also becoming popular.

Expert ski instructors came to America from Europe, founding ski schools teaching the Arlberg Technique. Soon ski trains started running to New Hampshire from Boston. The summit auto road on Pack Monadnock was a big draw for early downhill skiers. Bill Currier reminisced about skiing the auto road in the 1930’s at our annual meeting in 1996. “A lot of people used to climb up the auto road and ski down it, a lot of people; it was amazing! There were people from Peterborough of course, Fitchburg, and the whole general area used to come up there. Usually you skied the lower half of it, but occasionally you’d climb all the way to the top and run that section.”

At the southern end of the Wapack Trail, a ski area was established on Mount Watatic around 1940. By the 1970’s it had added snowmaking and chairlifts and a two story base lodge. I remember night skiing there in the 1960’s when they had two T-bars. It shutdown in 1984.

A much smaller affair was Kidder Mountain Ski Area in New Ipswich. It was located just off Appleton Road and operated by the Koivula brothers. It had two short rope tows and less than 100 feet of vertical drop, and was popular with locals from 1962 to 1967. There were two main slopes separated by a narrow band of trees, and two narrower trails, one on each side of the ski area, and a warming hut at the base.

The last ski area to operate along the Wapack was Windblown Cross Country Ski Area. It was opened in 1972 by Al Jenks in fulfillment of his boyhood dream of operating a ski area. Windblown was a great success, with a large loyal following. It offered 40 kilometers of groomed ski trails and snowshoe trails with beautiful views, a spacious lodge with a fireplace and great food, a ski shop with rental equipment, warming huts, and cabins and overnight shelters for rent. It is fondly remembered as a place for skiers to connect with nature and each other.

Windblown was the last operating ski area on the Wapack Range when it closed in 2020. It seems appropriate that the the first and last ski businesses along the Wapack were cross-country ski areas. These historic ski areas place the Wapack Range firmly in the annals of skiing history. There is much more that could be said about these ski areas in future articles. But what is the Wapack Trail’s contribution to skiing history?

What was the first ski trail in the US?

What was the first ski trail in the US? Here is a quote from a letter written by Tom Cabot, addressed to our then Historian, Constance Hall, dated December 10, 1993:

“My first clear memory of those trails was working at least one weekend and maybe two in the summer of 1924 with a group from the Appalachian Mountain Club headed by Arthur Comey to get the trail over Temple Mountain and Barrett Mountain properly cleared so they could be used for skiers. Later in that year, I started making arrangements for taking a group of Harvard students who had just joined the Harvard Mountaineering Club, of which I was co-founder with Henry Hall and Henry Schwab, on a cross-country skiing trip from Russell Station in Greenfield to the Ashburnham Station in Massachusetts, spending one night at the Wapack Inn [Lodge]. There were about thirty inches of new snow. I have written several accounts of the trip because it ended in a nearly fatal accident to Bob Balch, who was then a Harvard freshman. Actually, he survived to become a professional skier, and a member of the Tenth Mountain Division. He was lost in the sinking of a transport in World War II.”

So this story from Tom Cabot puts the date of opening the Wapack Trail for skiing at 1924. Here is a quote from the Journal of the New England Ski Museum, issue number 105, Summer 2017:

“New Hampshire was the scene of the first American efforts to create trails through the forests specifically for skiing. Some members of the Appalachian (Mountain) Club began this work in 1923, trimming and widening the new Wapack Trail in the southern part of the state into a ridgetop cross-country twenty-one mile ski route that traversed the numerous summits from Mount Watatic on the Massachusetts border to Pack Monadnock.” So based on Tom Cabot’s letter and this information from the New England Ski Museum, it appears that the Wapack Trail could well have been the first ski trail in the US.

There is also this reference to the Wapack Ski Trail from the January 25, 1935 issue of The Ski Bulletin, Volume 5, Number 6.

“When volunteer parties of Appalachian M. C. skiers, with axes and brush hooks in 1927 began chopping a ski trail over Barrett and Temple mountains in the Wapack Range 50 miles northwest of Boston, we doubt if a single mile of downhill ski trail had been constructed (as such) or was even projected, anywhere on this continent. Twenty miles of trail were completed in the Wapack region before the idea spread farther northward in New Hampshire, first to the Belknaps in 1931, and then in 1932 to Franconia Notch, N.H., and also to the edge of the Adirondacks in North Creek, N.Y..”

This Ski Bulletin article author was apparently unaware of the earlier 1924 Wapack Trail ski trail work related by Tom Cabot, but even 1927 predates other ski trails according to the author. 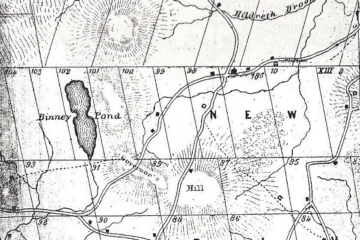 What got me researching this question is the Friends of the Wapack received an email from poet David Crews, asking if we knew how Binney Hill got its name. David was writing poems for Northeast Read more…