What got me researching this question is the Friends of the Wapack received an email from poet David Crews, asking if we knew how Binney Hill got its name. David was writing poems for Northeast Wilderness Trust’s (NEWT) four Ambassador Preserves, and Writing the Land, a partnership between the environmental and creative communities. One of the Ambassador Preserves is the Binney Hill Wilderness Preserve, which NEWT protected in 2016, with the Friends of the Wapack as an important partner in the effort.

The short answer to David’s question is Binney Hill, Binney Hill Road, and Binney Pond are named for John and Dinah Binney, who settled there and established a farm in 1781. John died three years later in 1784 at age 56. Dinah died in 1791, age 63. They had six children. One of their sons, also named John, succeeded to their farm. This son must have moved away at some point, because he died in New York state in 1844. The Binney’s liked the name John, because there were at least 6 generations of John Binneys from the 1600’s to the 1800’s! The John who settled in New Ipswich was the 4th generation John Binney in America.

The first John Binney who arrived in America lived from 1656 to 1698, and is buried in Hull, Mass. His grave can be found on the Find a Grave website. This John is the ancestor to everyone with the Binney name in America.

John and Dinah left their farm in Marlboro Mass. in their early 50’s, with presumably at least one of their adult children, to start a new farm here. I recently wandered the Old Burial Ground in New Ipswich and found the grave of John and Dinah Binney in the far corner of the cemetery. They are the only Binneys I could find that are buried in town.

So now the question arises, where exactly was the Binney farm, and is it now part of NEWT’s Binney Hill Wilderness Preserve? “The History of New Ipswich New Hampshire, 1735-1914” by Charles Henry Chandler, referring to John Binney, states that “He lived up on the summit of the hill which took his name, on lot 100.“ On this page is a section of the map of New Ipswich from 1851, showing some of the original granted lots in the southwest corner of town. You can see that Binney Hill Road goes through lot 100, and there were two structures on the lot at that time. Note that where the map shows Governor’s Hill, the word “Governor’s” is on Binney Hill, the word “Hill” is now Emerson Hill. This area around lot 100 is now part of NEWT’s Binney Hill Wilderness Preserve.

Visiting the website NH Stone Wall Mapper, you can zoom in on the satellite image of the Binney Pond area and see that many of the original lots still have their boundary stone walls, including lot 100. The satellite image shows that the south west corner of lot 100, the Binney farm, is across Binney Hill Road from the NEWT kiosk and gate, which is the intersection of the Wapack Trail heading south and Binney Hill Road. You can identify the large clearing behind the gate to confirm the location.

With the farm site identified, my next thought was to wander lot 100 to see if there is any remaining evidence of the Binney farm. I found that stone walls abound on the property, including an interesting run of two parallel walls, perhaps marking a narrow farm road. There is also what appears to be a stone foundation, but if it had a cellar hole it is now filled in.

Knowing something of it’s history increases one’s sense of connection to this land, a place where nature can now take it’s natural course as a forever wild preserve. At some point in the future, the land will look the way John and Dinah found it 240 years ago. 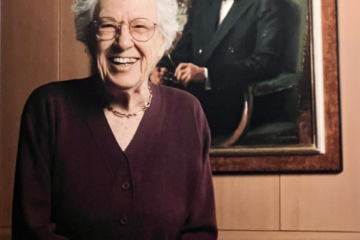 Who were Laurence and Lorna Marshall?

There is so much that could be said about the remarkable lives, and the many accomplishments of Laurence and Lorna Marshall. Laurence was a founder of Raytheon Corporation, and served as its president for 38 Read more… 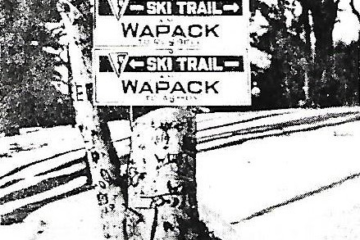 A History of Wapack Ski Areas Before examining the history of skiing on the Wapack Trail, it is important to the story to note the many popular and historic ski areas that were developed along Read more…